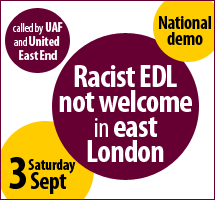 Join the National Demonstration
Saturday September 3rd
Called by Unite Against Fascism and United East End
The EDL – an organisation of racist and fascist thugs – is threatening to march through the east London borough of Tower Hamlets on September 3rd. This is the planned culmination of the EDL’s summer of hate, which included their march in Cambridge in July which met such fantastic opposition from wide sections of the community.

As in Cambridge, its attempts to stir up racist hatred against Muslims in the multicultural, multiracial East End of London have been met with a wave of condemnation from across Tower Hamlets’ diverse community and beyond.
Last year, 5000 people marched through the East End to oppose the EDL – even though the racist thugs had already been forced to cancel their own event, admitting that it would be "a suicide mission” in multicultural Tower Hamlets.
Now we want a huge turnout in Tower Hamlets to deal a more decisive blow to the EDL and its poisonous racist ideas
Coaches Leave Cambridge Queens Road (The Backs) at 9am, cost £5 / £3
To book your place look here www.repeatfanzine.co.uk/antinazi/coming%20up.htm or e-mailcontact@cambsagainstthenazis.co.uk or ring 07870368708
Posted by Cambridge SWSS at 12:44