March on the Tory Conference

This Sunday thousands of people will take to the streets to march against David Cameron, George Osbourne and the rest of the Tory wreckers as they come to Manchester for their annual conference. Backed by the TUC this demo will be the first shot across the bow of the Tory’s in what looks set to be an exciting autumn of resistance.

The Tories are trying to make us pay for an economic crisis that we did not cause. They are ramming through massive cuts, closing vital services, slashing jobs and destroying the futures of young people. They are trying to make people work longer, have to pay more towards their pensions and get less when they do finally get to stop work. They are trying force the market into education, resulting in £9K fees and private companies hovering like vultures over institutions. 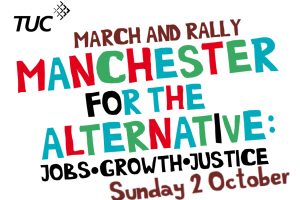 But the resistance is growing. Last autumn we saw a huge upsurge in student struggle. On 26th March 500,000 people joined the TUC march for the alternative. On 30th June 750,000 people were on strike in defence of pensions. Later in the autumn, on 30th November it looks like up to 3million workers could be out on strike in the largest mass strike since 1926. We need the biggest possible turn out for the demo at the Tory conference to start an autumn of resistance!