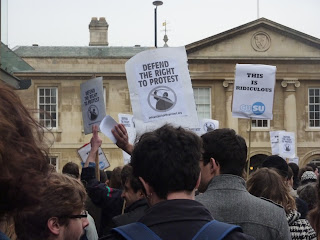 The University of Cambridge court of discipline ruling to suspend PhD student Owen Holland for two and a half years is an outrageous attack on the right to protest. It is a clear message that the University will not tolerate dissent; that it would rather stand with a government who is actively seeking to destroy the higher education system than with its own students and staff. The decision has provoked widespread fury within the University and beyond. Almost 8000 people at the time of writing have signed a petition initiated by CUSU and Cambridge University UCU including Liam Burns, NUS president, Mark Serwotka, General Secretary of the PCS union, Michael Rosen, poet and former children’s laureate, John McDonnall MP, Tariq Ali, Michael Mansfield QC, academics from all over the world, and thousands of students.

Owen participated, with many others, in a peaceful protest last November when government minister David Willetts came to speak as part of a series on the ‘idea of the university.’ Staff and students voiced their anger in the form of an epistle addressed to the minister for universities and science, who chose to abandon his talk. The lecture theatre in which the protest took place was then occupied by activists until the magnificent public sector strike on 30th November. Activists used it as an opportunity to agitate around the attacks posed in the higher education white paper as well as to build support for the pensions strikes.

The protest was a collective action, yet the university chose to single out an individual student to victimise. As a response to this 60 students and academics have signed a ‘Spartacus’ letter stating that they played a role in the protest and so the University, in the interests of being ‘fair’ should charge them as well. We reject the notion that an individual should have been victimised in this way, but also that they have charged anyone in the first place.

The University court of discipline can have no motivation for this harsh, unprecedented sentence other than sending a warning shot to activists resisting the government’s attacks. It is unlikely that a sentence of this nature would have been given if it was not for actions against Willetts. It is an exemplary sentence, designed to stem future activity.

In the last 18 months Cambridge University, in common with many other institutions, has seen an increase in activism related to increase in tuition fees, cuts to HE budgets, and the increasing commodification of education and influence of private companies. Clearly this has had ups and downs; winter 2010/11 was a high point. In Cambridge this saw an 11 day occupation of the Senior Common Room in Old Schools, with an estimated 1000 people passing through. The protest and occupation that occurred in November 2011, for which Owen has been punished, is a continuation of the struggle which exploded at Millbank on November 9th 2010. While in autumn 2011 the movement wasn’t as strong as the previous year, significant layers of people could be mobilised. In the aftermath of the protest against David Willetts there were attempts to portray the occupation as the ‘bad’ occupation, counterposed to the ‘good’ occupation of the year before. This is an argument we should resist. Both occupations had the same political message running through them, and it is unlikely that without the experience gained from the 2010 occupation that activists would have felt the confidence necessary to occupy this time. To condemn the later occupation only serves to divide a movement that we need to strengthen.

Attempts to combat activism are not isolated to Cambridge University. There has been a concerted effort by the state to clamp down on those against their assault on the working class. Protesters have been kettled for hours without access to food, water or toilets. The police have brutally injured many protesters. Many young people have been handed down custodial sentences, some for a year or more. Alfie Meadows is facing charges of violent disorder in court next week, when he almost died and had to undergo emergency brain surgery as a result of being hit by a police baton. For all of us who don't want to see the NHS, education and the welfare state destroyed we need to stand by those being attacked by the police, victimised, incarcerated or chucked out of their universities.

Undeterred by the University of Cambridge’s attempt to quell activism, students, staff and residents of Cambridge took the streets on Friday to protest against Owen’s suspension. Around 500 people marched through the city chanting “What do we want? Justice!” and “Boris, Boris, hear us shout, we won’t let you kick Owen out!” In a mass meeting at the end of the march there was a unanimous vote of no confidence in the vice-chancellor, the chancellor, the university management, and the university court of discipline. Further protests are planned at the installation of Lord Sainsbury as Chancellor on Wednesday.

Owen is facing his future being wrecked because he, and many others, stood up to a government minister who is determined to wreck the future of young people now and in generations to come. We have to stop Willetts and his fellow ministers. We do this by continuing to the fight for education. We do this by defending the right to protest.

This should be read alongside:
GO HOME DAVID: an epistle to David Willetts
No retreat in face of liberal attacks