First they come for the students: Solidarity with all migrants 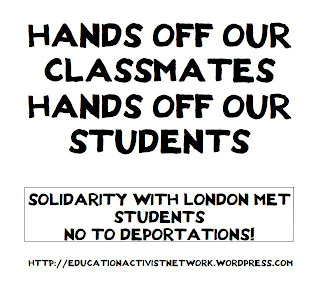 The announcement by the U.K. Border Agency that it has withdrawn London Metropolitan University’s licence to sponsor international students is shocking, but it comes as no surprise to migrants right's campaigners, who have seen increasingly draconian action being taken by the government against non-EU immigrants for some time. The decision has plunged thousands of international students at the university into crisis, even when it is has been acknowledged that the majority of those affected are entirely innocent of any wrong doing.

It’s not just students that are being targeted. Family members of British citizens who want to join their loved ones in the U.K. are now faced with harsh new laws and restrictions at every turn. Since the 9th of July this year any foreign ‘spouse’ wishing to join their partner in the U.K. must now be able to prove level B1 Intermediate English language skills and sit a ‘Life in the U.K’ test before being allowed to enter the country. Previously the required level was A1 beginners, an achievable qualification for a majority of language learners.

It can take years of involved study and a considerable talent to reach an intermediate level of proficiency in any language, especially when trying to learn in a country where the language is not spoken or not necessarily taught well. The new requirement is designed to be unachievable and to therefore prevent people from visa application success. Add to this a requirement to prove knowledge of life in the U.K. without ever having set foot here and you start to see that the government’s tactic is to make an impact on immigration figures wherever it can, fair or not.

But this is just the tip of the iceberg. In family visa applications from outside the EU, the British ‘Spouse’ and sponsor must now be able to prove that they are earning an income of £18,600 a year and that they have been earning this much for at least 6 months before any application will be accepted. They must then continue to prove this level of income for the next 5 years. Effectively, if you lose your job or become ill or go on maternity leave, you won’t be able to rely on the support of your husband or wife as they will automatically be in breach of immigration regulations and be expected to leave or be deported.

The changes are affecting large numbers of people and are proving to be hugely discriminatory. Already it is clear that the income threshold of £18,600 a year excludes about 47% of the working population of the U.K. If you are a woman, from the Bangladeshi or Pakistani community, young or from the North of England, Scotland or Wales, that figure rises still. If you are the foreign spouse and you are bringing your children with you, the income requirement of your sponsor increases by £3,800 per year for the first child and £2,400 per year for each subsequent child.

Vulnerable family members of people living in the U.K. are also being targeted. Previously families were able to bring elderly relatives to live with them; this was based upon the family’s ability to demonstrate that they had sufficient funds to pay for their care. New changes to this category mean that if you can prove that you have the funds to pay for the care of your relative, then you will be expected to arrange for that care to take place in their country of residence. Your relative will not be allowed to join you unless you can prove that alternative arrangements for their care cannot be found. An impossibility, as it will be argued that you can pay for a home help or live in carer to care for your relative, wherever they are.

The Conservatives are desperate to prove to their voters that they are taking action on immigration and will reduce net migration ‘from the hundreds of thousands to the tens of thousands’ by the next election. Full right of appeal has been removed for family visitors whose visa application has been refused and there are also to be restrictions on the use of Article 8 of the European Convention on Human Rights and the right to private and family life. Teresa May thinks that this right should not be seen as ‘absolute’ when it comes to immigration and that public interest and protecting the rights of the taxpayer should take precedent.

Anti-immigrant rhetoric has been whipped up in order to create the conditions for these changes -  talk of ‘illegal immigrants’ who come to the U.K. to break the law and exploit the benefit system. However, those that are familiar with immigration rules know that non-EU migrants have never had recourse to public funds and only have limited access to welfare benefits after they have worked and paid National Insurance contributions for a year. Nor are non-EU migrants eligible for social housing or free treatment on the NHS.

The government is targeting groups of people that were already meeting the requirements set out by the UKBA and is using them to make it appear as though they are sticking to their election pledges. International students pay tens of thousands of pounds to come here and non-EU family members become suitably integrated with the help and support of their British families. The government in its desperate attempt at political point scoring is taking action that could possibly be unlawful based on paranoid, dishonest, incoherent and confused notions around migration.

Campaigners hope that the cracks will begin to show soon as case by case the appeals of families and individuals are heard and decisions overturned. Not to mention the legal challenges that will come when it becomes clear just how discriminatory these changes are. Until then there are thousands of people suffering from enforced separations and threatened deportations and we must act in complete solidarity with all those affected. We should support the campaigns that are building. For more information check out the links below.