No Pasaran!: EDL humiliated in Walthamstow

Anti-fascist activists from Cambridge Unite Against Fascism joined thousands of others to oppose the EDL in Walthamstow yesterday. The EDL were humiliated as activists from Walthamstow, and beyond, prevented them from marching on their planned route. Demonstrators on the “We are Waltham Forest” march, opposing the EDL, staged a sit-down protest, blocking a key junction, forcing the EDL though back streets. The EDL only managed to draw about 200 to their protest, while the anti-fascists numbered around 4000, and represented the diversity of one of London's most multiracial areas. 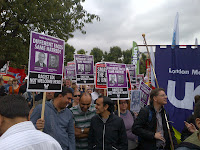 Activists held the junction throughout the day, as well as a smaller group blocking the area outside the Town Hall, where the EDL had planned to have their rally. A dejected and humiliated looking Tommy Robinson, the leader of the EDL, attempted to address a small group of 12 or so supporters over shouts of “Nazi scum off our streets”. From the vibrant and lively anti-fascist gathering it was hard to tell that the people Robinson was speaking to were meant to be a rally. 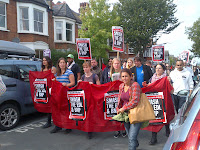 We opposed the EDL marching in Cambridge last year, and stopped them from marching in Walthamstow yesterday. We showed the way we can stop fascists marching. You can ask them all the hard questions you want, but the only thing that will actually stop them is by organising thousands of black and white activists to take to the streets and oppose them there.
Posted by Amy at 11:28