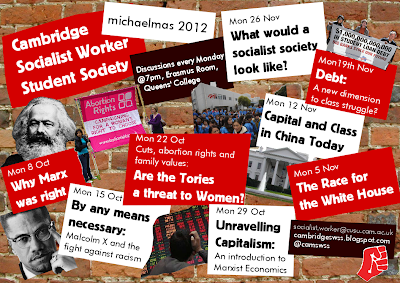 Cambridge University SWSS will be meeting every Monday in the Erasmus Room, Queens' College at 7pm.  Meeting will have a short introduction and lots of time for questions, discussion and debate.

Scroll down for the termcard!

Monday 28th January // 6pm
Erasmus Room, Queens' College
Climate Change: are we too late to save the planet?
with Amy Gilligan (Socialist Activist)

Last year saw the failure of yet another summit to deal with climate change. We face the urgent question of how to stop climate chaos.

We will discuss and debate whether 'materialism' and 'consumerism' really the problems behind the current crisis?; to what extent are the problems of climate change the problems of capitalism?; could a socialist society meet the challenges of an environmentally harmonious and sustainable future?

At the heart of these issues also lies the question of agency - who can stop global warming and how?

Come and join the discussion. All welcome!

Come and join the discussion. All welcome!

Erasmus Room @ Queens. Enter via Porters Lodge, over the bridge, across the courtyard and to the right up the stairs. Unfortunately the room is not wheelchair accessible. Ring 07821177250 if you need directions.

Monday 28th January ** 6pm**
Climate Change: are we too late to save the planet?
Amy Gilligan (Activist, University of Cambridge)

What would a socialist society look like?
Sai Englert (Socialist Activist)

26th October
The Struggle to liberate Palestine:
the case for BDS
Speaker: John Rose (Author, The Myths of Zionism)